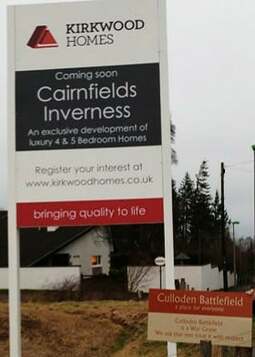 October 3, 2018 . . .Scottish Community Alliance
Culloden no more
Last weekend at Wigtown Book Festival, the historian Sir Tom Devine spoke about his latest book on the Scottish Clearances. Slightly off script, he also launched into a tirade against what he described as a fundamental injustice in the planning system. He was referring specifically to the case of a developer who plans to build luxury housing on the Culloden Battlefield despite widespread objections from communities from all over Scotland. His scathing criticism of the appeal system brought spontaneous applause from the 200+ strong audience. Here is a good piece by Kevin McKenna in the Observer.


Please follow the new petition directed to Scottish Government to introduce legislation to preserve all land indicated by the HES Inventory of Historic Battlefields...on which Culloden Battlefield is clearly indicated!

If you live in Scotland...please contact your local MSP and express your opinion about a housing development at Culloden Battlefield!   To find your MSP click here

Protect Culloden, a video created by a member of the Scottish diaspora in Australia...the Battlefield of Culloden will never be as it is now if development around it is allowed!

"Cairnfields site - I've spent all my life knowing about the significance of Culloden, and what it means to people around here and afar. Your company obviously hasn't been doing its research into the historical importance of the site, or maybe your company is merely motivated by greed.

The battlefield isn't simply the bits that the National Trust for Scotland has fenced in. It encompasses a far larger area than that - and you're planning building houses on that area - an area of huge national importance. People fought and died at the area you call 'Cairnfields' - and the area is protected... Which begs the question - how did you get permission to build there? Dirty, unscrupulous deeds I think... Why do you insist on building there?

Look around - there's 1000s of acres of land surrounding Culloden, where you could easily build without creating provocation. Why do you have to insist on building at Cairnfields, when you know full well, the problems and animosity you create? Think again, a measly 16 houses - which probably will sell to people without knowledge of the battle, who have never even lived in the area. Do you provide them with information about this? How you are disrespectfully building on war graves? Or do you just not care at all? Think of it this way - would you build those houses on your own family graves? Think again Kirkwood Homes - what you do is just plain wrong...." 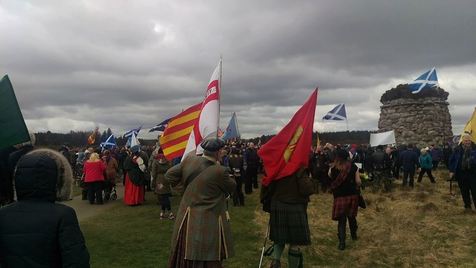 The 1745 Association was one of the parties involved in the public consultations before the greatly-expanded Culloden conservation area was announced on 15 December 2015. We support the new boundaries, and applaud the reasoning set out in the preliminary 'Culloden Muir Conservation Area: Character Appraisal and Management Plan,' November 2015.

We note in particular the observation that: 'Ongoing research indicates that the area around Viewhill Farm will have been significant at the time of the battle and that the Government lines may have extended into this area.' In 2013 Historic Scotland (as it was then) used its status as a Statutory Consultee to support an application to develop sixteen houses on the site of the derelict Viewhill Farm, its argument being that it would not affect the what it termed 'the heart of the battlefield area' or 'the battlefield core,' by which it seems to have had in mind the few hundred yards accessible to the public to the south of the B2006. The 1745 Association expressed its reservations to such a narrow definition of the historic battlefield site at that time, as it was already known that the area of the combat extended down the slopes towards the Nairn to the south, and well to the north of the B2006 towards Viewhill Farm. In addition, the development was in breach of a conservation boundary declared only a matter of weeks before by The Highland Council as a consequence of the Scottish Historic Environment Policy (SHEP) on battlefields.
The current application to build a full estate in the vicinity of Viewhill Farm is, in our view, a clear test and violation of the Culloden conservation area as set out on 15 December 2015. The country to the north of the B2006 is rolling and open, and the development could not fail to become the dominating feature of the landscape.

For this reason, The 1745 Association wishes to formally reiterate its opposition to the development proposals. 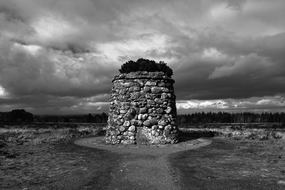 Update: June 11, 2014
To all who take an interest in this cause:
This group was formed in January, 2014, following a report on Scottish Television that a company called Inverness Properties had appealed a decision by Highland Council, to reject a planning application for 16 houses on Viewhill farm, 400 mtrs from the Culloden Battlefield enclosure.

On further investigation we found out that Historic Scotland had done what is called an "Inventory of Historic Battlefields" of all the battlefields in Scotland. In that inventory they drew a line around an area of Culloden Battlefield that they described as "of national importance". The proposed development is inside this area and part of the extended battlefield area. The whole site /area is a burial ground for those who perished there during that bloody battle and it should be treated as sacred ground in their memory.

Our demand: THIS MUST NOT GO AHEAD!

We campaigned to put pressure on the Scottish Government to overturn/recall this decision to allow the development and we also suggested that a wider policy be put in place for the protection of all the land around the Battlefield.

We created a petition, which has had world wide support, with over 18,000 signatures. We have organised numerous protest and flyer handout days at Holyrood, Culloden and Inverness. Public support has increased due also in part to reports in the media. We also set up this web site which has taken this embarrassing story even further out into the world.

As we developed the group and met the various situations that arose, we found out that the Ministers and the Reporter were in a difficult position due to two major factors: Historic Scotland had given the developer their permission to go ahead with the development and the Highland Council Planning Officer had also agreed to the development, although it was rejected later by the councilors of Highland Council, in a planning meeting.

We had considered appealing the findings of the Reporter at the Court of Session. In doing so, we sought legal advice and it was at that time we were informed that the Ministers and the Reporter were restricted by the earlier decision of Historic Scotland and the Planning Officer and it was unlikely that we would win.

Just about the same time we heard that the Scottish government was about to announce a plan to give the area around all the battlefields the greater protection we were seeking... too late for Viewhill. Nonetheless it would seem our campaign had been making an impact. We feel we have encouraged this greater protection to be created, possibly earlier than had been planned. Better still, we also heard that the individual who owned the land was preparing to have talks with the NTS about selling it to them, quite possibly including the piece of land proposed for the 16 houses. We have also learned that the NTS is conducting an archeological assessment of the entire Viewhill Farm area. We await an announcement from the NTS.

We may still have more work to do. If building work starts, we must be prepared.

Thank-you,
George Kempik for The Admins of GSDC